Brexit: a chance for a Wider Europe “from Lisbon to Vladivostok”

The cost of Brexit

Formally, Brexit took place on January 31, 2020. However, Brussels and London still need to work out the rules for their new relationship. This includes everything from trade, immigration, aviation, security, and access to fishing waters. For this, a transition period for the negotiations was set until November 2020. During this time, the UK will still follow EU rules, and trade between the two will be the same as before. The transition period ends on December 31, 2020, after which Brexit will de facto come into force.

If no agreement is reached on the further format of trade and economic relations between London and Brussels by mid-October 2020, a so-called “hard Brexit” will take place, meaning that the UK will leave the European customs union and the EU’s single market, with both parties re-imposing tariffs and various behind-the-border non-tariff barriers to each other. Great Britain will also no longer be able to benefit from the European free trade agreements with third parties.

Economists agree: a hard Brexit would lead to a considerable welfare loss for both sides. According to various simulation studies by the Munich-based ifo Institute, the GDP loss in Great Britain would be between 3.5% and 1.5%, and the average loss for the EU27 between 0.25% and 0.6%. Depending on the Brexit scenario, the UK’s exit from the European Union will reduce German national income by 0.5 to 0.8%.

German exports to Great Britain would shrink by more than 50% or more than -EUR 2 billion. Both the exports of pharmaceuticals and road vehicles, with a decline of EUR 0.7 billion and EUR 5.3 billion, depending on the outcome of the negotiations, would be the most affected sectors.

As part of the Brexit, Great Britain will also stop paying contributions to the EU budget. According to CEP estimates, the UK paid an average of EUR 6.4 billion more per annum to the European budget than it received, despite the “UK rebate”. According to EconPol, London’s gross transfers were twice as high – EUR 14 billion.

This gap must now be closed – and, as usual, for the most part by Germany. According to estimates by the federal government, the annual German contribution to the EU budget for the period from 2021 to 2027 will increase by these EUR 14 billion per year to EUR 42 billion per year.

With the UK, the EU is losing its second-largest economy and an important trading partner. In 2019, UK GDP was equivalent to 15% (in current EUR) or to 18% (according to purchasing power parity) of European gross domestic income. In terms of economic strength, Brexit is synonymous with the simultaneous exit of 19 of the 28 EU countries. The European Union is thus losing a large part of its international economic influence.

Brexit as an opportunity

Yet, Brexit in the west could also be an opportunity to improve trade and economic relations with the east. This is because the EU is parting with one of the most passionate advocates for the transatlantic alignment of Europe and one of the most ardent critics of Russia. On the other hand, with Great Britain leaving, that group of states in the EU may gain significant political weight which, according to studies by the European Council for Foreign Relations (ECFR), is in favor of negotiating a compromise with Russia on Ukraine (Map 1). This could mean that Berlin, whose political measures are strongly influenced by transatlantic think tanks, could in the future be overruled in many EU decisions that could have been prevented with a blocking minority of 35% in the Council of Ministers.

Map 1. Alliance of European countries for normalization of relations with Russia 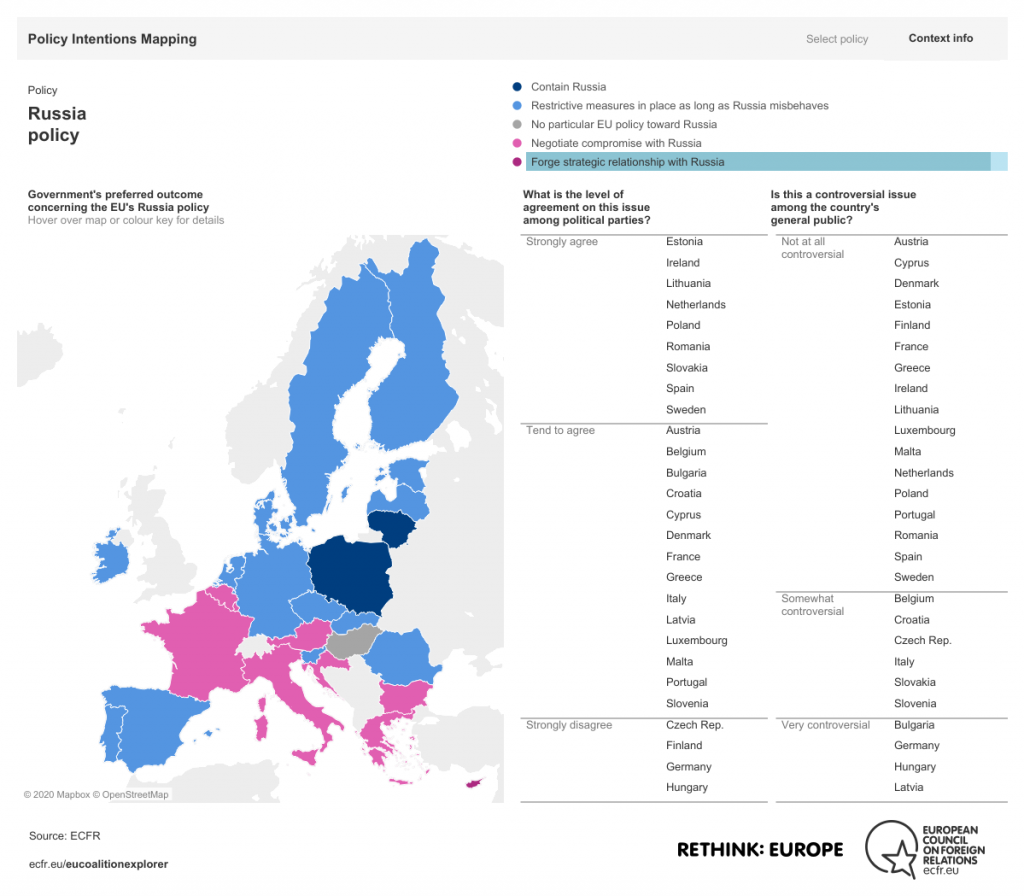 Such a power shift in the European Council, together with the need to compensate for the economic and geopolitical damage caused by Brexit, could re-open the possibility of closer trade and economic cooperation between the EU and the Eurasian Economic Union (EAEU) under the so-called “Wider Europe from Lisbon to Vladivostok” – concept.

But due to the Ukraine crisis and the tensions between Russia and the West, relations between the European Union and the Eurasian Economic Union have had no chance to develop. Although the Eurasian Economic Commission (EEC) has repeatedly confirmed its interest in deeper cooperation with the EU, the European Commission, partially under pressure from London, has not held any official talks with its vis-à-vis and has not yet publicly recognized the international legal personality of the EAEU.

Could the EAEU compensate for Brexit?

The Eurasian Economic Union, founded in 2015 by the five post-Soviet states Armenia, Belarus, Kazakhstan, Kyrgyzstan, and Russia, is a supranational trade and economic bloc with the aim of creating a common internal market based on the free movement of goods, services, labor, capital, and enterprises. In 2019, its GDP according to purchasing power parity was EUR 4.2 trillion.

Measured in terms of economic power, the EAEU makes up between 12.6% (in current EUR) and 24.3% (according to purchasing power parity) of the gross domestic product of the European Union, depending on the counting method. In that sense, a deeper trade connection between the Eurasian Union and the EU would either partially or even more than compensate for the UK’s exit.

At the same time, the population of this eastern economic bloc (184 million people) is almost three times that of the UK (67 million people). On the other hand, the British per capita income with EUR 40.5 thousand is on average almost twice as high as that of EAEU citizens with EUR 23 thousand per year.

Thanks to its greater purchasing power, the United Kingdom accounted for 5.8% of total EU exports in 2018, the EAEU only 1.8%; while the share of both in total European imports was roughly the same at 3.4%.

Accordingly, European exports to Great Britain (almost EUR 295.8 billion) were three times as high as to the EAEU (EUR 95.4 billion), although exports to the east contained a somewhat larger proportion of high-tech and higher value-added products (Fig. 1 .). 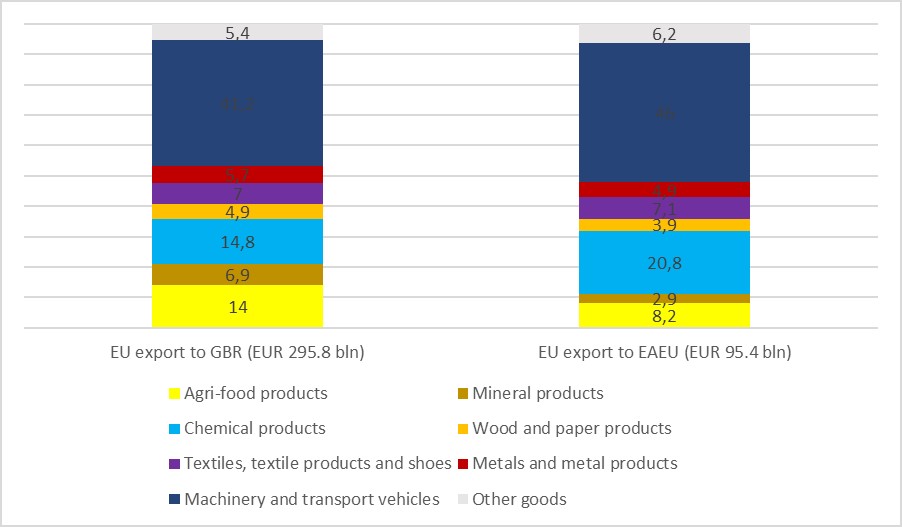 On the other hand, European imports from the UK and the Eurasian Union were roughly the same at just over EUR 170 billion each. At the same time, Eurasian exports consisted mainly of raw materials and hydrocarbons for the European industry, transport, and energy sectors. In contrast, British exports to the mainland were much more diversified (Fig. 2.). 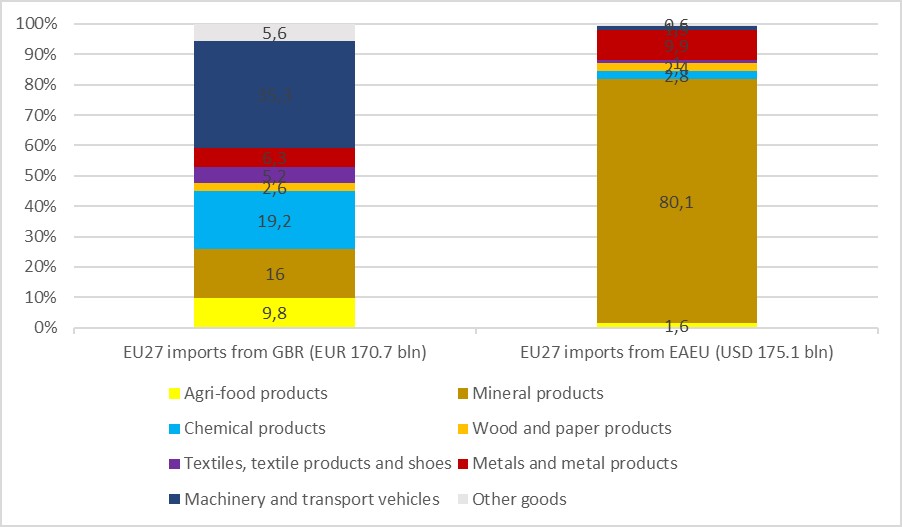 According to studies by the Russian Institute for Economic Research, there is a large but unrealized mutual trade potential between the EU and the EAEU due to sanctions and various trade restrictions. Using a gravity and a product space model, the economists estimate that the medium-term EU export potential to the EAEU markets is USD 53.1 billion. Goods with strong export potential mainly include products with high added value: chemicals, pharmaceuticals and vaccines, cosmetics, electronic devices, cars and trucks, airplanes and helicopters, medical devices and instruments.

In other words, even though the EAEU is a smaller sales market for the EU, there is greater factor compatibility between the two, which can become an important basis for guaranteeing Europe’s economic sovereignty, which is so sought after by Brussels and Berlin.

There is already an important technical framework for the creation of a common economic space between the Atlantic and the Pacific, namely the fact that the Eurasian Economic Commission has decided to independently adopt up to 90% of European technical regulations and product conformity standards.

The results of their DGSE model show that a free trade agreement between the EAEU and the EU, which would include chapters on goods, services and foreign direct investment, would increase European GDP by 0.1 to 0.3% (EUR 17 to 51 billion) depending on the depth of the agreement.

According to my own estimations, employing a multi-sector partial-equilibrium model, exports of goods from the EU to the EAEU alone would increase by almost 30% (EUR 26.1 billion), which would bring the EU a welfare bonus of 0.1% (EUR 14.7 billion).

According to a study by the ifo Institute, which uses a gravity and DSGE model, such a “Lisbon to Vladivostok” free trade are would increase German exports to the Eurasian markets by 60% (EUR 31 billion). As a result, such a free trade agreement would increase Germany’s gross domestic income by 0.1 to 0.2%, which would make every German EUR 28 to 91 richer per capita.

The German sector with the highest value-added growth rate of 3.4% (EUR 2.4 billion) would be the automotive industry. This sector would account for around a third of the total increase in net value added in Germany from the FTA. Relatively high growth is also expected for metal products (1.8%) and machines (0.5%). Interestingly, service sectors such as public services and real estate would also benefit. These industries are hardly ever directly affected by free trade agreements. They benefit more indirectly from an increase in aggregate demand and cheaper intermediate products (e.g. a free trade agreement would lower the prices of building materials).

The economic research shows that the creation of a common economic space from Lisbon to Vladivostok could partially compensate the European Union and Germany for the economic and trade-policy costs of Brexit (Tab. 1). Yet, more importantly, due to their factor compatibility, an EU-EAEU free trade agreement could provide the basis for wider European prosperity, growth, and economic sovereignty in the future.

Tab. 1. Trade and welfare effects of Brexit and the “Lisbon to Vladivostok” common economic space in comparison

Source: Prepared by the author based on the research presented in the text above.

A blog about Europe's strategy in wider Eurasia, European and Eurasian integration, and the prospects of a common economic space from Lisbon to Vladivostok.